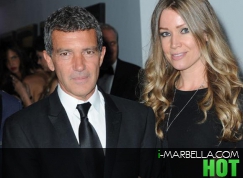 
According to Antonio Banderas, he is happy with his new girlfriend, Nicole Kimpel, but is taking things slowly.

"We are in the process of getting to know each other," he said. "She is shy and doesn’t have anything to do with my work, which is no bad thing."

Nicole Kimpel, a Dutch investment consultant, began dating Banderas after his 19-year marriage to Melanie Griffiths came to an end.