Annika Urm Blog: If Hermès is calling you MUST go! 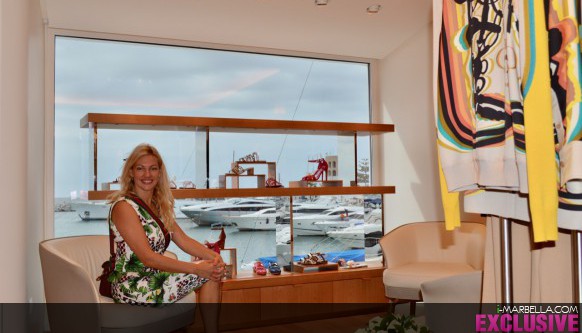 
On the 13th of June, 2019 Hermes reopened its store in exquisite Puerto Banus Harbour, Marbella. With this enlarged space, Hermès reaffirms its presence in one of the leading holiday destinations in Spain.

The Hermès family has 5 shops in Spain, and the one in Puerto Banus has two floors for both men and woman sections, a Great display of jewellery, a lot of space with and an incredible view over Puerto Banus!

I mean it, you can literally look over the harbour on matching the green-blue carpet to the sea view.

The ground floor is fitted with mineral furnishings, and upon entering, the customers are welcomed by the emblematic ex-libris mosaic floor pattern inspired by the store at 24 Faubourg Saint-Honoré in tones of blue, in a space brightened by the Grecques lighting, originally designed for Hermès in 1925.

The flooring, in Andalusian Macael marble, adorned with mosaics which delineate the two principal areas on this floor, where customers can discover the men’s universe, perfumes, silks, jewellery, and accessories.

Next, on the first floor, whose facade has been renovated in a contemporary style, two large windows allow guests to admire the Andalusian port of Puerto Banús.

In this regard, the oak parquet harmoniously pairs with the white walls and ceiling as well as with the polished cherrywood furniture in the spaces dedicated to the women’s universe, home collections, bags, and small leather goods.

The space dedicated to jewellery and watches is defined by its walls covered in handwoven abaca wallpaper, and a large bay window which bathes the store in light.

The place is just stunning, this new store welcomes visitors into the heart of Hermès abundant collections and reveals the freedom of creation fueled by the excellence of the know-how.

Besides, it gives an omen to their first clients: horses. Therefore, artistic horse saddles are the centre of the shop, and on the wall, there are art pieces of perfect finish in every detail.

I was even able to find out the prices of every piece.

Every new pattern from creation to get approved by family and coming to shop for selling takes 2 years.

Also, I was asking about the famous Hermès Birkin bag price and delivery time.

The Hermès shop is known for never giving discounts.

Yet, another impressing feature of this place is that the employees are wearing Hermes uniforms, which is nice.

On the other hand, I am not sure how they feel about selling to rich people items that cost the equivalent to several months of their salary. But surely they get used to it.

In the end, the shop is beautiful, a real piece of art, filled with artistic features and ornaments, and has an exquisite view and an undoubtedly high-level service where every customer, who can afford it, will feel special.

In Marbella, luxury tourist destination Puerto Banus harbour has Besides, around the amazing Hermès Store there all the other high-end stores like Cristian Dior, Versace, Dolce & Gabbana and many more!

Since 1837, Hermès has remained faithful to its artisan model and its humanist values. The freedom to create, the constant search for beautiful materials, the transmission of a savoir-faire of excellence, and the aesthetic of functionality all forge the singularity of Hermès, a house of objects.

Hermès is an independent, family-owned company, Hermès is dedicated to keeping the essential element of production in France through its 42 workshops and to developing its network of 310 stores in over 49 countries.

Axel Dumas, a sixth-generation family member, has been Hermès CEO since 2013. Founded in 2008, the Fondation d’entreprise Hermès supports projects in the areas of artistic creation, training and the transmission of savoir-faire, biodiversity, and the preservation of the environment.