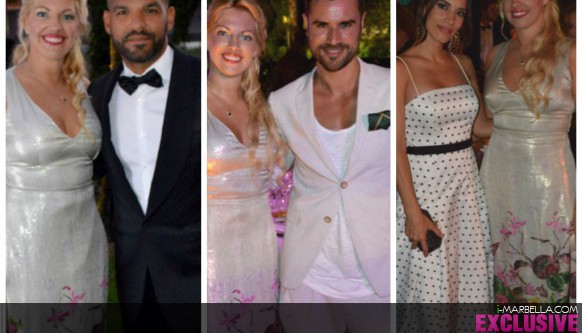 
Inside the 5th edition of the Global Gift Gala 2016 in Marbella with i-Marbella and Annika Urm.

The Global Gift Gala took place at the Gran Meliá Don Pepe on the night of the 17th of July 2016 for the fifth time.

As to Maria Bravo, she is my idol now. Having opened Casa Global Gift in Marbella, I do not know anybody who would do so much for her home town. She is the angel of Marbella, although she has been living in LA for 27 years, her heart still belongs her hometown Marbella, where her family is. Maria Bravo has been supporting Marbella through the Global Gift Charity Platform.

In the first phase of reconstruction of the donated space, Maria Bravo revealed that the Godmather of the first Casa Global Gift will be actress Eva Longoria.

If you need a job done, you need Eva Longoria as she is just the best!

As a business woman, I very much liked the fact that the auction was started by Ana Tormo (Global Gift Foundation Member), but when it was crucial to sell an item, Eva Longoria herself took over, nobody being able to say no to her. Fantastic! The funds are sure to be donated to charity, and I'm twice as delighted about the fact.

There was a plethora of celebrities attending the event. I love beautiful and smart business women that I can look up to, such as Maria Bravo, Alessandra Ambrosio, Carmen Lomana, India Martinez, and, of course, Eva Longoria

I just love how simple Eva is, she is such a kind human being. If she needs to take her shoes off to be more comfortable, she will do it. If she fall in love with the music, she will sit down to listen or just start dancing barefoot.

Eva Longoria was fascinated by Adrian Vega, listnening to the young celebrity in awe.

The eleven-year-old boy has become an Internet sensation in Spain (and internationally) thanks to his incredible voice!

Last year, a clip of little Adrian, who suffers from water on the brain and has congenital malformation of his hands, singing with his elder sister went viral, getting more than seven million hits on YouTube.

The album is available on iTunes and Spotify.

I also had a chance to interview Amaury Nolsacoga live and walk along the red carpet. Join i-Marbella, one of the most famous media channels on the Costa del Sol!

Annika's Blog: 3 Days in Marbella - See for Yourself How Many Places One Can Visit!

Annika's Blog: Flamenco and Walking in Marbella Old Town with My Family!