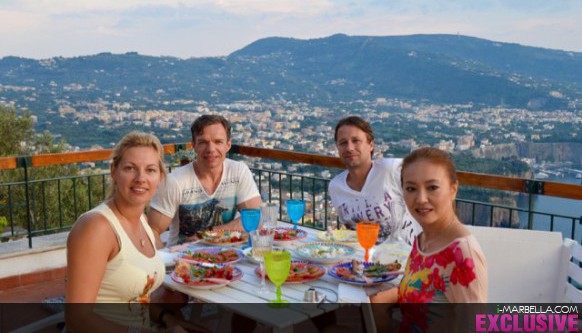 
During our weekend trip to Italy Spring 2015 with Saeko Hamada, Alessandro della Morte, and Veiko Huuse, we visited Sorento, Positano, and Amalfi. The Amalfi Coast blew our imagination, to say the least!

Like the rest of the region, the Amalfi Coast lies in a Mediterranean climate, featuring warm summers and mild winters.

The Amalfi Coast is known for its production of limoncello liqueur as the area is a known cultivator of lemons, known as sfusato amalfitano in Italian, which are grown in terraced gardens along the entire coast between February and October. Amalfi is also a known maker of a hand-made thick paper which is called bambagina. Other renowned local products are a particular kind of anchovies from Cetara, and the colorful handmade ceramics from Vietri.

I strongly advise you to see the well-known church located in Amalfi that is includes at least three churches from different times.

I was also deeply impressed by Positano, being as beautiful as it is shown in pictures and on postcrads. Positano is a small village situated on the cliffs of the southern coast of Italy. It is such a wonderful place for romantic walks by the sea and on the sandy beach!

Prices are very reasonable at both stores and restaurants.

We actually stayed in Sorento at a villa with an incredible view of the sea. We will never forget our breakfast and dinner meals on the terrace!

Staying in Sorento, we had a chance to attend a cooking school where we prepared Italian dishes -- appetisers, pastas, and, of course, Tiramisu.

Shopping and walking in the Old Town of Sorento is highly-recommended as every hotel, restaurant, cafe, bridge, and garden is splendid. Sorento is also bigger than Positano or Amalfi, which means that one can enjoy its beauty far and beyond.