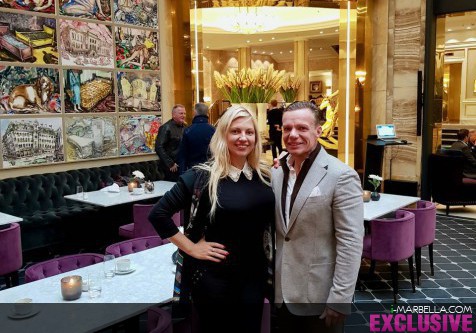 
Since we departed from Estonia it took around an hour or maybe hour and a half of flight to Oslo. Estonia is a small country, so small that you can literally know almost everyone, whether it is the president, a minister or a pilot, could be one of your friends, classmates or family.

This time, as a matter of casualty our pilot for this flight was my uncle’s wife Kadri Kalind who came out to greet us personally on board –A real heart-warming experience and also made this flight very special-

Annika Urm Blog: One-day trip to Oslo, Norway 2017
On the other hand, Norway is a somehow bigger country, and as we travelled in the middle of the autumn season the weather was quite silent, the wind was already cold and you could actually feel some magical and nostalgic feeling in the air.

Norway turns awesomely colourful during the autumn, and everything turns to a vivid and bright red colour, the leaves and soft moss of the mountains turn red and as there are just so many trees, well, everything gets covered off.

Autumn in North Europe is usually this beautiful. It gets colourful, chilly and fresh. I just love it. Alongside, it wasn’t really that cold, so one can actually wear a dress during this season.

Annika Urm Blog: One-day trip to Oslo, Norway 2017
Anyway, Oslo is the capital city of Norway, so we enjoyed more of a city walk during our visit.

Even when we came to the place in the name of the business, my boyfriend and I had the chance to visit the old town and spend all day enjoying a nice Nordic autumn day.

We walked through the city’s Main Street and ended up by Oslo Stortinget Station which displays an awesome late 70’s architecture.

Norway is very cultural, just like all European countries and its capital city wouldn’t be left behind.

Down the seaside, there is famous and beautiful Opera house named Snohetta which represents an awesome architectonic jewel. The city has nice Theatre and opera houses all the way.

The walking street in Oslo is quite wide and makes you feel like if you were in a movie.

Later on, we had tea in the old train station house, which was full of modern cuisine establishments, then, we had lunch at the Nobel Grand Hotel of Oslo where I had a glass of champagne and a tasty and creamy seafood soup.

People say that Oslo is a very expensive city Train tickets from Airport to City were about 15€ one way and for quite close stops, champagne was 21€/glass and seafood soup took 26€ taking in count that this was in a luxurious establishment.

From what I found out, Oslo’s average minimum salary is for about 15€/hour but the cost of living just makes it harder than other Nordic capitals like Stockholm or Helsinki.

Anyway, this is an awesome place to visit, and looks like a wonderful city to settle down, especially if you have a professional condition.

I hope that sharing this would encourage you of travelling to such a beautiful city, keep in mind that autumn is a nice time to go there and if you have any experience that you’d like to share about Oslo please do it in our comment section below.

Annika Urm is a journalist, blogger, the director of i-Marbella.com, and her job is to report emotional experiences and facts in the best possible way. Annika is a modern entrepreneur, a business lady of high standards and exquisite taste. Annika's incredible performance is best described in her numerous followers (more than 100,000.00 each month).

Worst of the recession over? (5)