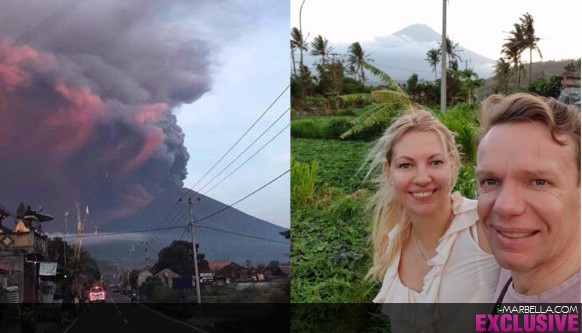 For you see, I have experienced what I believe confirms to me that destiny, fate, does exist.

So, this is how it went. My boyfriend Veiko Huuse and I had plans to assist to an event at Bali, Indonesia on October’s first of 2017 which we planned in advance a few months ago. This event supposed to be the start of the worldwide project with thousands of people. It was a big responsibility.

Like with any business you have to make all that you need to do in business and sometimes you just feel something is not right or not sure if you are on right way. Veiko was asking for any sign to know if we should stick to the initial plan or not.

And then, Mount Agung volcano in Bali suddenly came out of the blue in the middle of September and we had to cancel our flight to Bali and also event for 10 000 people.

This way, on September’s 25th, the day we were supposed to fly to Bali, Mount Agung volcano went into mild eruption activity, the evacuation zone was about 6-9 km long and more than 140 000 people were evacuated for three weeks.

The 3048 metres (10,000-foot) tall Mount Agung volcano was experiencing increased volcanic activity for the first time in more than 50 years, causing people to flee the area, but didn’t show any major activity until this date.

I and Veiko changed the direction of our project completely and started all over again and with right people, positive energy and also more successful and with many times bigger perspective. Purpose of the project is Save the World and make everyone who is involved happy.

At the end, we went to Bali from October’s 23 to 30, again just by coincidence, and destiny allowed us to restart the whole project with the right people who were meant to be there at this time. And this way we avoided some huge mistakes with minimum damages.  Mount Agung Volcano guide us to right direction. And we are so grateful for that.

We spent those days in Bali next to the Agung mountain, by the sea and at Golden Rock Retreat centre. We were also passing by Agung mountain since it was the only road that could take us to the village and the business meetings we had there.

This is story, Annika Urm  Blog: My First Cleaning and Detox retreat in Bali 2017

I also wrote news about the fact that Bali was Calm and Safe by the end of the October:

And now on November 25th and basically one month after my trip to Bali, the Volcano started to present dangerous activity again.

The evacuation orders on Sunday 26th came after the second eruption of the volcano in less than a week and on Saturday evening, thick plumes of smoke reached 6,000m (19,600 feet) on the air, prompting airlines to issue a red warning that another more serious eruption was “forecast to be imminent”.

Indonesian authorities warned, calling for 100,000 people to evacuate the area.

Moreover, Indonesia’s disaster mitigation agency has strongly urged people to immediately evacuate the designated exclusion zone, which has been extended to an 8-10km radius around the volcano.

And on this way, the Airport spokesman Air Ahsanurrohim exposed that 445 flights were cancelled, stranding about 59,000 travellers.

Instrumental measurement of Mount Agung began after the last big eruption that occurred in 1963, an event that lasted a year and killed more than 1,000 people turning the area into a high-risk zone.

This way, because of the flow of events and how they worked out in a spontaneous way I feel like having living proof that fate exists and things are going to happen the way they will happen no matter the plans or what we think.

This, for me, was a lightning strike of good fortune as I still hold my thoughts on those who live near the Volcano’s range.

I wanted to share my experience with you, let me know your opinion in the comments section below, and remember to keep in mind the news and your instinct when you are travelling, sometimes things don’t happen the easy way for a good reason.