Annika Urm Blog: Cloud Forest at gardens by the bay in Singapore impressed me the most 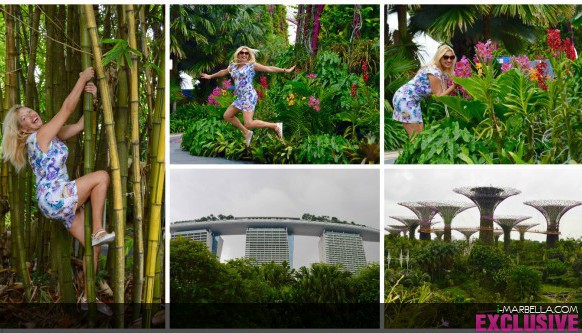 Supertrees perform a multitude of functions, which include planting, shading and working as environmental engines for the gardens Source: Annika Urm


Singapore, officially the Republic of Singapore, and often referred to as the Lion City or the Little Red Dot, is a sovereign city-state in Southeast Asia, and the world's only island city-state. It lies one degree (137 km) north of the equator, south of the southernmost tip of continental Asia and peninsular Malaysia, with Indonesia's Riau Islands to the south. Singapore's territory consists of a diamond-shaped main island along with 62 other islets. Since independence, extensive land reclamation has increased its total size by 23% (130 km2), and its greening policy has covered the densely populated island with tropical flora, parks and gardens.

Annika Urm is a journalist, blogger, the director of i-Marbella.com, and her job is to report emotional experiences and facts in the best possible way. Annika is a modern entrepreneur, a business lady of high standards and exquisite taste. Annika's incredible performance is best described in her numerous followers (more than 100,000.00 each month). Enjoy reading Annika's experience about the city that took her breath away, Singapore.

Gardens by the Bay is a nature park spanning 101 hectares (250 acres) of reclaimed land in central Singapore, adjacent to the Marina Reservoir. The park consists of three waterfront gardens: Bay South Garden, Bay East Garden and Bay Central Garden. The largest of the gardens is Bay South Garden at 54 hectares (130 acres).

Gardens by the Bay is part of a strategy by the Singapore government to transform Singapore from a "Garden City" to a "City in a Garden". The stated aim is to raise the quality of life by enhancing greenery and flora in the city.

The Flower Dome is the lower but larger of the two, at 1.2 hectares (3.0 acres). It replicates a mild, dry climate and features plants found in the Mediterranean and other semi-arid tropical regions (e.g. parts of Australia, South America, South Africa).

The Flower Dome during the Christmas season

The Flower Dome features seven different "gardens" as well as an olive grove with a bistro and a central changing display field has also been incorporated to enable flower shows and displays to be held within the conservatory.

The Cloud Forest is higher but slightly smaller at 0.8 hectares (2.0 acres). It replicates the cool moist conditions found in tropical mountain regions between 1,000 metres (3,300 ft) and 3,000 metres (9,800 ft) above sea level, found in South-East Asia, Middle- and South America. It features a 42-metre (138 ft) "Cloud Mountain", accessible by an elevator, and visitors will be able to descend the mountain via a circular path where a 35-metre (115 ft) waterfall provides visitors with refreshing cool air.

Cloud Mountain and its breathtaking waterfall

The "Cloud mountain" itself is an intricate structure completely clad in epiphytes such as orchids, ferns, peacock ferns, spike- and clubmosses, bromeliads and anthuriums. It consists of a number of levels, each with a different theme.

Supertrees are tree-like structures that dominate the Gardens' landscape with heights that range between 25 metres (82 ft) and 50 metres (160 ft). They are vertical gardens that perform a multitude of functions, which include planting, shading and working as environmental engines for the gardens.

Supertrees perform a multitude of functions, which include planting, shading and working as environmental engines for the gardens

The final construction cost for the project, not including the price of the land but including an access road, drainage works, and soil improvement, was within a $1.035 billion allocated budget. The annual operating cost was expected to be approximate $58 million, of which $28 million was for the operation of the Conservatory buildings. The project received 1.7 million visitors between June and October 2012, who had free admission to most portions of the park but were required to purchase tickets for entering the Conservatories.

Annika's blog: Happy 2017 and welcome to new cycle of events

Annika Urm Blog: Singapore, the city that took my heart