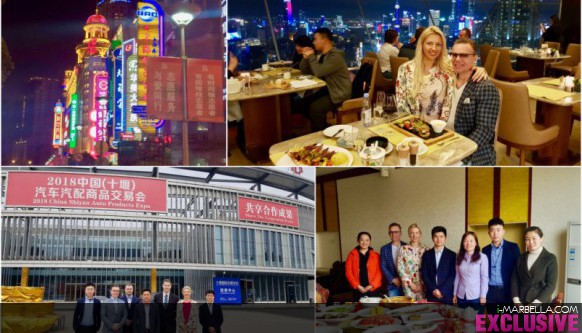 
Everything about our ( Annika Urm and Veiko Huuse) business trip during the Spring Season 2019 in China! CLT factory investors meeting, Golden Stevia meeting, sweetener factory, plantation tour, and much more.

My fiance Veiko Huuse and I savoured a successful business trip to China during the 2019 spring season.

China feels almost like another planet with 9,600,000 square kilometres. China population rises up to 1.4 billion people, it has its own world without popular websites like Google, Google Maps, Youtube, Facebook, Instagram, Whatsapp, and Telegram. It's hard to believe it right? You cant access any of these websites whilst being in the Chinese territory. Furthermore and probably most important, you can't enter online banking outside of China.

So this meant for me a first few days totally out of the information I used to get almost every single day! isn't that crazy? Luckily we could find a way out using a VPN service (Works basically changing your IP address) which is actually illegal in China but this was the only way we had to contact our children and answer work emails.

Of course, this doesn't mean Chinese people are living without the internet, they just have all their own websites, social network platforms, programs, etc. Obviously all these in their own language.

Chinese people in China don't speak English or any other languages different than Chinese. They just don't have this in their education system. They also don't need tourists, people, since they have already too many people.

The largest city is Shanghai. We spent there our final days in China. We visited the city centre, a shopping street Nanjing and had a spectacular dinner at the Radisson Hotel on top moving around the restaurant Epicure on 45 with perfect rotating city view. Elegant, with modern style and appeal and a bird's-eye view of the city. Shanghai's finest a la carte selections and exciting show kitchens preparing delicious food from Europe, China, Japan and India.

Air pollution (sulfur dioxide particulates) from reliance on coal is a major issue, along with water pollution from untreated wastes and use of debated standards of pollutant concentration rather than Total Maximum Daily Load. There are water shortages, particularly in the north. The eastern part of China often experiences smoke and dense fog in the atmosphere as a result of industrial pollution.

The country also has significant water pollution problems: 40% of China's rivers had been polluted by industrial and agricultural waste by late 2011.

China's economy has been the largest in the world since 2014, according to the World Bank. As of 2018, China was second in the world in a total number of billionaires and millionaires -- there were 338 Chinese billionaires and 3.5 million millionaires. China brought more people out of extreme poverty than any other country in history - between 1978 and 2018, China reduced extreme poverty by 800 million and reduced the extreme poverty rate. China's own national poverty standards are higher and thus the national poverty rates were 3.1% in 2017 and 1% in 2018. (Source: www.wikipedia.org)

it becomes important for western tech giants to make a market in China. ... More specifically the Chinese government doesn't want the foreign tech.

For our business trip, we had to use a translator to get along this journey. we hired a translator who was all the time with us. rate? 1000 yen per work-day. Ken who is already a friend for us, is such a friendly person and it was nice to hang out with him. Of course, we couldn't forget our Chinese friend Jin that we met with translation help.

We had several business meetings in China in so many different cities, for instance, CLT (Cross-laminated timber is a wood panel product made from glueing layers of solid-sawn lumber together) production company investors meeting and also our most healthy product Stevia sweetener factory, plantation tour, and a business meeting.

We will expand our sweetener business Golden Stevia with the various product that we sell in Europa for households, bakeries, and food production companies.

We guarantee the best taste and highest natural quality of stevia sweetener product on the market. You don't have to use them as much sugar. You can use them 10 x less than sugar and much healthier no fructose, no glucose, no sahuaros.

In China food is much better quality than in Chinese restaurants in Europa. Whatever you imagine about China it is much better! Food is better in China, People life quality is very high, Shops are not cheap as you think in Europa “let's go China shop to get cheap stuff”, this cheap china shop in Europa doesn't represent China at all, very misleading:)! Of course, fashion is strange to European people, totally different!