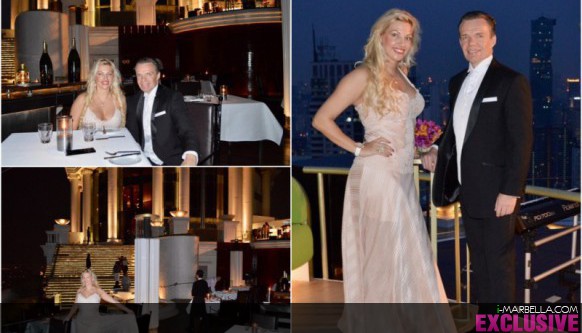 During 2017, I was visiting Bangkok many times and fell in love with its Roof-Top Restaurants.
Having a pleasant meal or just hanging out at this height is a unique way to enjoy and discover the city’s essence, especially at night time when you can enjoy the lights on an amazing panoramic view and feel like the world is yours.
This way, I dedicated this blog to talk about my experience in Bangkok, the hotel and the best sky restaurants I had the pleasure to enjoy in Bangkok.

Annika Urm and Veiko Huuse having Welcome drink at Distil bar on 64th floor at Lebua at State Tower Bangkok in 2017
We stayed at Lebua at State Tower in Bangkok for 3 days and had an opportunity to see and visit all restaurants and bars in this hotel.
We enjoyed the Tower club, a luxurious five-star hotel in Bangkok, one where every moment is memorable, personal, and exceptional.
World’s Leading Luxury All-Suite Hotel, Lebua, has 136 expansive and elegantly-appointed suites, each with separate bedroom, living room and kitchenette, offering spectacular city and river views

Annika Urm , Veiko Huuse at the entrance to all Lebua Hotel Rooftop bars and restaurants on the 64th floor.
This luxury hotel in Bangkok takes from the 51st to 59th floors of the tower with amazing views from 221 gigantic suites. The separate bedrooms, living room and kitchenette complemented by infinite thoughtful personalized touches ensure comfort at all cost.
This way they turn the room into a fully enjoyable department that mixes both, the feel of an unusual experience and home.
The non-alcoholic minibar, Nespresso coffee machine, and premium bathroom amenities, are all complimentary, as is the access to the intimate and sophisticated Tower Club Lounge where you can enjoy all kinds of meals.
At the end, we actually had breakfast many times in Café Mozu which is extremely close to the hotel and is actually where every hotel guest goes.
The choice of food and selection was like 100 times wider and Tower Club gave you included prices (just extra for lunch and pre-dinner snacks with alcohol included).
The only problem was to actually get up to the room because we had to use the same lift that all restaurants guests use.
Sirocco's and The Dome food was excellent and their restaurant service was just perfect.

The DOME Restaurant at Lebua State Tower in Bangkok.
We had thought some problem with all securities on the way. They were quite unfriendly and not helpful, very strict with taking pictures on stares, even if they were helpful in the Sky Bar.
I told them that I take pictures for publishing, but whatever I said they were very rude in response.
Also, it was impossible to get in 2 minutes before and they were actually late opening the doors to the establishments, for like 10 minutes.
In the table and restaurants, on the other hand, they were much nicer and offered to take pictures friendly and helped us a lot.
The food was excellent, just amazing, and in every restaurant of Lebua.
Ocean 52 had a poor selection, breakfast service was really slow and it was difficult to get anything you really wanted, so next days we were having breakfast in Cafe Mozu where at least we got good and varied food and quickly.
About Lebua
When it comes to the best luxury hotels in Bangkok, those with lavish suites, breathtaking views, fine dining and iconic rooftop bars, Lebua at State Tower has received worldwide recognition and numerous awards. Not only the hotel, but all the restaurants in the tower have been award-winners several times.

The DOME Restaurant at Lebua State Tower in Bangkok.
The Dome at Lebua is the best rooftop venue in Bangkok, with an outstanding structure that is housing the best restaurants and bars, including Sky Bar and Sirocco, the world's tallest open-air Mediterranean restaurant.
More epicurean delights wait at Distil lounge, our celebrated Asian restaurant Breeze, and Mezzaluna, the fine-dining mecca acclaimed for its innovative cuisine.
63rd Floor
For an incomparably romantic rooftop dinner with riverside views, an impressive business dinner, or an unforgettable family get-together, a few cocktails at Sky Bar followed by dinner at the best rooftop restaurant has become the new five-star standard of the Bangkok bar and restaurant scenes.
About this, Sirocco has received worldwide recognition and numerous awards like all restaurants in Lebua. In the hotel was also Mezzaluna – Bangkok’s finest and highest restaurant on the 65th floor at Tower Club at Lebua.  But we didn’t go there. We just loved to sit outside the Dome or Sirocco more.

Sky Bar is the world’s highest open-air bar. It is located on the 64th floor of the State Tower located on Silom Road at the Bang Rak business district, Bangkok, Thailand, which is the second tallest building in the country.

High atop Lebua at the State Tower and Tower Club, The Dome is a collection of rooftop restaurants and bars that lures guests every night with irresistible dining and beverage choices, a divine service, and the best city views in Bangkok.

For many people, this is a paradise where the best bars and restaurants of Bangkok are to be found.

On the 63rd floor of a Bangkok skyscraper, and part of the city's Lebua hotel, Sky Bar at Sirocco is the worlds highest open-air bar and a popular nightlife spot on humid Bangkok nights
An evening at Sirocco has been considered a fine dining experience ever since the world’s highest alfresco restaurant first opened its doors – a distinction that was confirmed when the restaurant received a Perfect 10 from Thailand Tatler for all four categories of Food, Wine, Ambience, and Service-.
It takes two nights to catch your breath and one dinner at Breeze or Sirocco above Bangkok to take it away.
One of the top restaurants in Bangkok is Breeze, the Lebua's homage to Asian cuisine
Mezzaluna, a 2 Michelin stars awarded restaurant and Bangkok’s finest and highest restaurant on the 65th floor at Tower Club.
At this top restaurant in Bangkok, breath-taking 180-degree city and river views are combined with fine European cuisine presented with taste, elegance, and innovation.

The Sky Bar is around the green bar. Rest of the terrace is The DOME Restaurant at Lebua State Tower in Bangkok.
Suspended on a precipice over the city 820 feet in the air, Sky Bar is one of the highest rooftop bars in the world and, along with Distil bar, one flight up, it reinvents Bangkok’s cocktail culture overnight.
Widely regarded as the top rooftop bar in Bangkok, the vertigo-inducing Sky Bar's innovative cocktails, striking atmosphere and spectacular views have made it a highlight of the Bangkok nightlife scene, and creations like the interesting Poptails where the mix experts bring together the cocktails and popsicle ice for the summer position this establishment atop of  the luxury drinking experiences.
Additionally, they have the well-known Hangovertini, which was created for the cast of The Hangover Part II while they were filming at Lebua, endearing it to the Hollywood crowd as well.
The glittering, multi-hued, and highest Sky Bar, is impeccably situated not just for Bangkok's best views as well as the best sunset views: it is also just steps from the much-awarded rooftop restaurant in Bangkok, Sirocco, positioning you perfectly for some extraordinary pre- and post-dinner cocktails and an unforgettable evening under the stars at a Bangkok's attractions which turns visiting the Sky Bar into a Must-Do when passing by Bangkok.
About Annika Urm
Annika Urm is a journalist, blogger, the director of i-Marbella.com, and her job is to report emotional experiences and facts in the best possible way. Annika is a modern entrepreneur, a business lady of high standards and exquisite taste. Annika's incredible performance is best described by her numerous followers (more than 100,000.00 each month).
Follow iMarbella:
i-Marbella Instagram
i-marbella.com Twitter
i-marbella.com facebook
i-Marbella online news facebook
Follow Annika Urm here:
Annika Urm Instagram
Annika Urm Facebook
Annika Urm Twitter
Annika Urm LinkedIn
Annika Urm Google+
https://annikaurm.blogspot.com.ee/