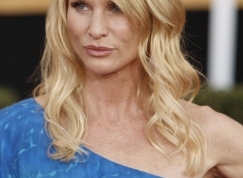 
Nicolette Sheridan sues Desperate Housewives for $20 Million, because of the show's creator Marc Cherry allegedly hit him in the face.

Nicolette Sheridan surprised everyone when she abruptly left the series Desperate Housewives. Everybody knew there was some sort of falling out but now we have learned exactly what the falling out was. Sheridan filed a lawsuit alleging that the show's creator Marc Cherry hit her in the face while on set and then fired her as a retaliation after she filed a complaint against him.

The lawsuit she filed yesterday in court is for $20 million claiming assault and battery, gender violence and wrongful termination.

After Cherry allegedly hit her on set, Sheridan yelled back "You just hit me in the head. That is not okay. THAT IS NOT OKAY!" according to the lawsuit.

Cherry then went to her trailer to "beg forgiveness," the lawsuit says, but Sheridan decided that she would still report him to ABC. Once she did that Cherry's behavior allegedly worsened. It got so bad that she got killed off the show.

"The decision to kill off Sheridan's character demonstrates that Cherry and ABC intended to and did retaliate against Sheridan for her complaints about Cherry," the lawsuit says.

So what's ABC saying about the lawsuit? ABC Studios says in a statement: "While we have yet to see the actual complaint, we investigated similar claims made by Ms. Sheridan last year and found them to be without merit."