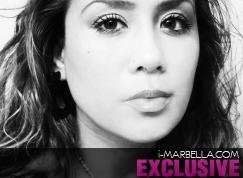 i-Marbella interviewed this amazing artist who will be performing in Trocadero Arena on the 5th of January at 10.30 pm, Jaidene Veda is a singer/ Songwriter/ Producer/ Award  winning Soud designer/ Film Maker, Photographer and Dreamer!!!

1- How did you start on the music industry?

i began as a promoter, producer & performer under the alias of "dub-bodé", where i was fusing deep house DJ's, Jazz horn players & my freestyle vocals in underground clubs...then we began branching into the corporate world, or fashion shows for Holt Renfrew, Art Galleries etc. Around the same time i was beginning my first studio endeavours, recording with Hip-Hop or House Producers who began to 'show me the ropes'. once i began to put out records & CD compilations they kept leading to more collaborations - now i've been lucky enough to work with some of the greatest influences on my career in studio or on stage...it's been an honor that people in my music collection have become my peers!

2- What is your first memory of being inspired by music?

BJORK. DEBUT. it was magical, and i was only 12! but deep house really inspired something in me and that started my journey into a full time career in music...

i always just wanted to be "that voice" on "a" record - honest to God, i never knew it would go this far, so it's extremely hard to say when i "woke up" and started living my dreams (i still can't believe this is my life, my career, my voice on those records...) but i suppose i took it very seriously when i pursued audio engineering, knowing i wanted to be more than just a vocalist. I wanted the skill set to be self produced, the ability to be an independent woman in this business is something i'm most grateful for

Piracy. the MP3 world we live in has devalued the industry beyond repare, and as an indie label, producer, artist - i truly feel and see the difference more and more each year - we are ALL affected by this terrible state of mind that everyone seemingly accepts "stealing music"...it's really changed the business

5- What was the inspiration behind Pisces Pendulum?

I am a proud pisces, but more so an Artist that identifies so much with the attributes of our water sign...the pendulum i speak of embodies the full spectrum of this journey we're on in life, and i happened to be able to sing about mine (these songs were written over a period from 2002-2010), the ups & downs, the highs & lows, the deep love felt or deep losses endured, healing, learning, growing...experiences we all have that i'm not shy to share, or be transparent in my lyrics. sonically speaking, it was my chance to compile music, genres & sounds ranging from deep house, to soul, nu jazz, spoken word, trip hop and even acoustic compositions - i really wanted to showcase ARTISTRY, which to me, means dynamic. the numerous collaborations on the project also allowed me to accomplish this, and truly inspired a lot of the music as well...

6- How would you classify your music?

7- You would performing on the 5th in Trocadero Arena in Marbella, have you ever been here before?

no, it is my first time, and after merely hearing stories and seeing photos of the venue, not only am i excited to visit such a beautiful city, but i am  honoured to visit on such a special occasion such as the "Día de Reyes"

8- After performing in Trocadero Arena, where will be your next stop

I will have a few more days in beautiful Madrid, then I am off to Belgium and Berlin prior to returning to London and surrounding UK stops for the last of my studio & gig schedule! It has been a beautiful trip, including my Father's country for Christmas - I saw Prague again - such a blessing!

9- What advice would you give to other musicians trying to get off the ground?

work HARD. believe in yourself, and focus on your Art, your true self, your true passion & love for this "something you create from nothing" will resonate when it comes from the right place...i have genuinely learned that inspirations comes full circle...so to every aspiring Artist? DREAM BIG, and then "go big" - self promotion is the most awkward part of this "game" but i conquered that from day one and it truly opened doors because everyone wants to give you a helping hand when you are willing to help yourself...everyone has been there before, so everyone wants to give back! so give all of yourself on stage, in studio, and in life. it will come back to you...if you believe.

i will have CD's at the venue for anyone attending at Trocadero Arena!

• my new album is exclusive to my indie site :: http://jaideneveda.bandcamp.com/album/pisces-pendulum-anniversary-rmx-lp

• as i am in Europe right now i am also offering a special "digital double album deal" http://www.youtube.com/watch?v=MCtw_Z3rIWg