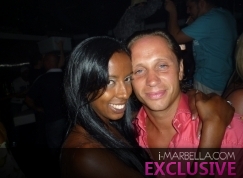 Belgium billionaire Dimitri Janssens (33) participated in an Estonian reality show, where he hoped to find the woman of his dreams. After doing the show it appeared that Dimi was already engaged with a Brazilian girl named Aila, who he met in Marbella. Moreover, she was already carrying his child. After a violent brake up last year the couple is married now and planning on their second child! The wife, Aila Lopes, talked to i-Marbella about their relationship now.