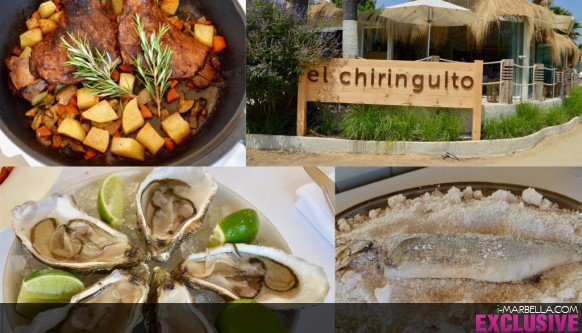 
El Chiringuito Marbella opened this summer 2017, and we had the task to review its food and here is what we think.

BRENDA WATERS 26-09-2017 18:23 Hello, I am Brenda waters After being in relationship with Jeff for years, he broke up with me, I did everything possible to bring him back but all was in vain, I wanted him back so much because of the love I have for him, I begged him with everything, I made promises but he refused. I explained my problem to my friend and she suggested that I should rather contact a spell caster that could help me cast a spell to bring him back but I am the type that never believed in spell, I had no choice than to try it, I mailed the spell caster, and he told me there was no problem that everything will be okay before three days, that my ex will return to me before three days, he cast the spell and surprisingly in the second day, it was around 4pm. My ex called me, I was so surprised, I answered the call and all he said was that he was so sorry for everything that happened that he wanted me to return to him, that he loves me so much. I was so happy and went to him that was how we started living together happily again. Since then, I have made promise that anybody I know that have a relationship problem, I would be of help to such person by referring him or her to the only real and powerful spell caster who helped me with my own problem he used his Africa Black Power. His email: greatosemudiagaspelltemple@gmail.com you can email him if you need his assistance in your relationship or any other Cases.

1) Love Spells
2) Lost Love Spells
3) Divorce Spells
4) Marriage Spells
5) Binding Spells
6) Breakup Spells
7) Banish a past Lover.
8.) You want to be promoted in your office
9) want to satisfy your lover
Contact this great man if you are having any problem for a lasting solution VIA: greatosemudiagaspelltemple@gmail.com