Novak Djokovic Loyal to Marbella, working with Angeles Munoz to get it as Center for Elite National & International Sports @Puente Romano 2020
Top Galleries 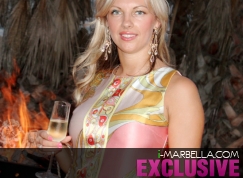 
Let me introduce myself - my name is Annika Urm. I'm from Estonia and I have a MBA in finance and also some experience in business life. I have built up one big media company in Estonia and have done several other businesses and I also own i-Marbella.com.

You&#039;llneverguesswhoIam 10-12-2012 15:07 Johnny, stop trolling!
No, wait! Keep on going!
It's hilarious and keeps the comment sections on this site interesting Hahaha
0

Me 2 09-12-2012 06:24 OMG this comment section is smokin'!
LOL
And btw, Suite is so expensive I've actually seen people showing up in the club with a glass already in their hands!!! Also, there used to be a bouncer to watch for the entrance of that club, well, not anymore...
0

Rob 05-12-2012 18:05 hello I do not understand why there are some people here who can not accept the opinion of others and have to get to the point of insulting. In my most humble opinion those who write and try to provoke Paul act like spoiled children. This place is losing its roots and is rapidly moving away in what was at first. There are many items with King Africa and wonder who the hell is that person and one thing is sure Annika likes to go out much in the photos especially when going to parties;) Make an effort and make this site a bit more chic; greetings
0

LM 05-12-2012 14:52 To every newcomer Annika's info is good to read and know.It looks easy and glamorous, but think and check the market first. I would say even 1,5 -2 years. Without it you will burn your fingers.Every business has its risk, it is normal.Sorry for the people and other companies who's bills are unpaid,there are always warning signs, therefore to everybody : check the background first, learn local life!Only these hard working, long established companies have survived well.You need the passion,funds for bad days etc. There are plenty of examples in area about very great services,people run fast for you and are very helpful.Marbella is beautiful and enjoyable.
1

to Paul 05-12-2012 14:14 Paul is really getting offended, are you half Spanish? :P Start moving your ass instead of commenting in the web hahahaaa
1

LM 05-12-2012 12:36 Johnny, stop it.It is childish.We others do not want to read. In business happens so many things all the time. My several ideas are run buy other people , because either I did not have cash, time or will.Enough, you have own page.
0

Paul Harper 05-12-2012 12:22 I know spanish people are in some ways lazy and people from Malaga capital are very egocentric but one more time if you are not happy with Spain then..... Move on!!!!!!!! Noone is asking you to stay there; Spain for sure wont miss ya.
And by the way a happy December from New York city to all those reading this magazin. If God wants I will be in Marbella next January after 45 years visiting that lovely place.
1

johnny 05-12-2012 11:42 I don't know why you people don't realise that Annika is a thief and only has a business here because she stole it and will soon be bought to account for her crimes
2

Romanian 05-12-2012 02:00 i can say that salaries are lower in Eastern Europa then in Marbella and this is a reason why i came work here. and i can say there are people at work who moving their ass faster then others.
1

To Paul 04-12-2012 21:00 no, its better if you dont work at all! And if you are trying to get the hardworking people out of Spain that means you're one of the lazy ones. And yes during December it is very hard to work in Spain. But there are lots of other good thing also about this country, therefore not all people leave who come here.
About the clubs, I know Olivia is open, also Luxx, Club district 13, Aqwa.. not bad!
1

Paul Harper 04-12-2012 13:17 Listen truestory, Annika is talking mostly about Clubs and tell me one club that close down on holidays. And about lazy workers you mean that they have to work under a dictature???. We all know that in Spain the salaries are very low compares with the rest of Europe and because of the actual crisis people has to work for nothing???? C'mon.
0

true story 03-12-2012 22:45 I agree 110% and to you Paul - it is about lazy people and their fiestas and siestas after every three days! But it is not only their fault, it all starts from the government. Lets take this week as an example, from tomorrow until Friday there are holidays, puente!!!! And in two weeks its Christmas! And when do Spanish people work in December???? One week? The ones who open this week every day - hats off!!!!