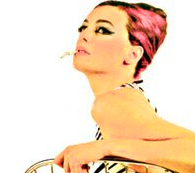 Thalia B, Parisian singer who lives in Malaga, was part of a band Addictive Larsen in which she played for thirteen years. But then she began a solo career with an artist name Thalia B & The Electrochic Club, whose debut demo has been included in the soundtrack of the television series "The bowl of Eve " and has had a considerable impact in the internet.

But now her first solo album Cinéphonie is coming out, which includes French and English songs composed by Thalia and Mr. Conde, who is also in charge of production. The album ranges from electronics and wildest rock.