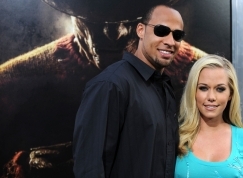 
Kendra Wilkinson is crying up a storm about the fact that we're all going to see her doing the dirty soon, but it turns out she tried to release her own sex tape! Only in Hollywood!

Kendra reportedly tried to shop around her own sex tape a year and a half ago, while she was engaged to now husband Hank Baskett.

Kendra's people were shopping around the tape she agreed to release, but only if she got final say in editing.

When news of the sex tape broke Kendra said she was “devastated” and “humiliated,” but she was the brains behind the operation this entire time! She supposedly recently had a change of heart about releasing the tape now that she's a mother, but it's too late.

Being a celebrity used to require talent, now all you need is a sex tape scandal or a trip to rehab. It's so sad what Hollywood has become.