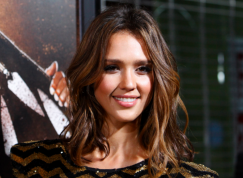 
The drop-dead gorg Jessica Alba is on the cover of the new Elle, talking about her body…..of work.

She talks about the crap movies she’s done for the sake of a paycheck—ahem, Fantastic 4, Into the Blue--telling the mag, “I know I haven’t been swimming in the deep end with some of the movies I’ve done. I wasn’t trying to. I knew what they were.”  But apparently Jess is trying to turn over a new leaf when it comes to picking and choosing her roles, a change that came about after she had her baby Honor.

"The time I'm not spending with my kid has to be worth it,” Jess tells the mag. “So when I sat down with my agents after I was ready to go back to work, I told them: It's all about the directors."

Alba also offers up this amazing gem of advice: “Good actors, never use the script unless it’s amazing writing. All the good actors I’ve worked with, they all say whatever they want to say.” And by “good actor” does she mean Lindsay Lohan, whom she starred with in Machete. Or maybe she was referring to the Oscar-worthy performance Dane Cook gave in Good Luck Chuck…

Jess’ next movie is actually a pretty big one for her—maybe her biggest to date: Little Fockers, where she stars alongside greats like Dustin Hoffman. Alba says doing comedy is refreshing for her. “I’m shy. I don’t like being the center of attention,” she claims. “But when I do comedy, I lose all inhibition and introspection. I no longer care.”