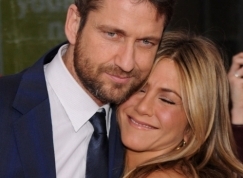 
Gerard Butler grabbed Jennifer Aniston's booty while posing for pics for fans on the River Seine in Paris Saturday night, according to TMZ.

You can see the pictures HERE.

The flirty co-stars, who are in France promoting their new flick, The Bounty Hunter, had just finished a dinner cruise with 20 guests.

The film's director told UsMagazine.com earlier this month they were "flirting" all throughout filming. Aniston has joked that she blames Butler for start "rumors" that they're hooking up. But the actress, who got cozy with Butler in a hot tub at her 41st birthday party in Mexico, doesn't exactly deny them. "Gerry is the best," she recently said. "He's funny and handsome. Nice combo!"

Butler agreed. "We have a natural chemistry," he recently said. "You can see it in our [W] magazine shoot and the film. We have a great time together."

Besides Aniston's derriere, there's another body part Butler can't get enough of. "Jen actually does have the best legs in Hollywood!" he said at the New York City premiere of The Bounty Hunter.